Deepest Blue: The Allure of Tanzanite 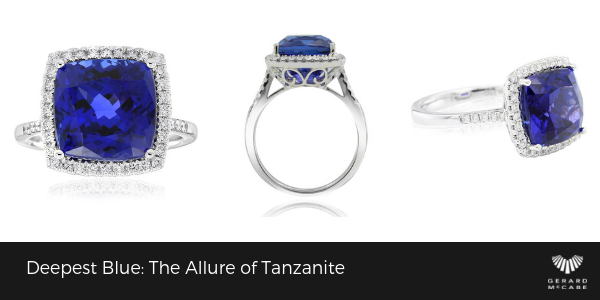 “Kilimanjaro is a snow-covered mountain 19,710 feet high, and is said to be the highest mountain in Africa. Its western summit is called the Masai 'Ngaje Ngai', the House of God. Close to the western summit there is a dried and frozen carcass of a leopard. No one has explained what the leopard was seeking at that altitude.”

― Ernest Hemingway, The Snows of Kilimanjaro and Other Stories

It wasn’t just the great, late Hemingway that was enamoured with Kilimanjaro. It is an enormous, soaring mystery that delights the eye and humbles the senses. Standing at 19, 741 feet it is the highest mountain in Africa. Situated in Tanzania it is formed of three volcanic cones, Mawenzi, Shira and Kibo. The former two are inactive, whereas Kibo is dormant, meaning it could erupt at any time.

It is part of the deliciously enthralling nature of the land that makes it so intriguing. In the deepest, darkest crust of the earth, enormous forces and pressures stew and create man’s greatest desires.

That is, of course, dazzling gemstones.

In our comparatively brief human life spans, we almost cannot begin to comprehend the forces at hand. Or rather, under feet. It’s no coincidence that diamonds and other precious gems are found in these highly active (or once active) volcanic regions. Beautiful, lush and exotic; these areas of volcanic activity have incredibly fertile soil, due to the breakdown of various minerals. This is how gemstones are created: massive amounts of heat, lava, and pressure combine to force gems up to the surface. Sometimes this can take millennia.

Which is part of the allure of precious gems. Not only are they beautiful and desirable in and of themselves, they are also directly of, and from, the deepest parts of our planet. It represents some force larger than life, more meaningful and incredible for it.

What makes Kilimanjaro so special is its vein of the extremely rare precious gem, Tanzanite. Mysterious and desirable, the tale of the discovery of Tanzanite is almost as rare as the gem itself. It was discovered in the late 1960s, which is incredible by gemstone standards. It was described at the time as ‘the most important gemstone discovery in 2000 years’. The creation mythology of the Maasai suggests that a bolt of lightning set the land ablaze. The heat of the fire transformed crystals on the ground into this stunning blue gemstone. 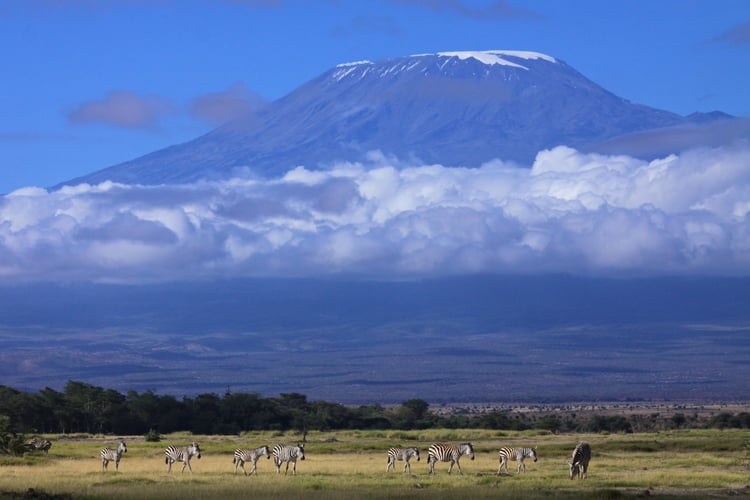 The more prosaic version of events tells how it was discovered by Maasai tribesmen. They shared their find of the gorgeously blue-hued stone with Manuel de Souza, a prospector who was on the hunt for Rubies. Initially de Souza mistook the stones for brilliant sapphires. However, testing soon revealed the excitement of a new discovery.

The legend of Tanzanite was born.

So what is Tanzanite exactly? It is a dazzlingly beautiful coloured stone, more vibrant than sapphires. Tanzanite is truly diverse, right through to its makeup. The stone can come in a range of hues, mixed blues, and purples. It also comes in the various shades and tones of these- lilac, violet, deepest indigo. This is due to the blue, violet and burgundy colour variation within the stone- which is referred to as trichroic. Kaleidoscopic and with the variegated mix of a peacock's plumage, this is one spectacular stone. 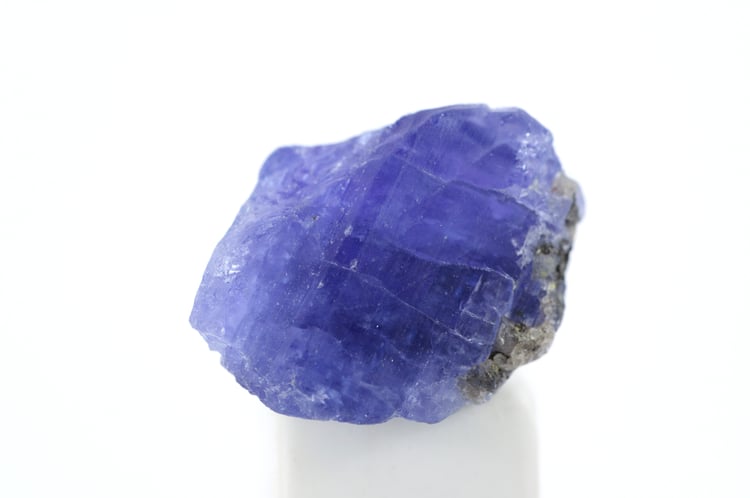 What makes Tanzanite desirable to collectors and jewellery lovers alike is its complete exclusivity. Naturally formed Tanzanite is extremely rare, and is 1000 times rarer than diamonds.

This is due to the fact that there is only one seam in existence, in the foothills of Mount Kilimanjaro in Northern Tanzania. The single deposit is a reef about 5 km long and is estimated to only last another 5 to 10 years. The Tanzanite Foundation has stated that intense geological research has shown that Tanzania’s geology is unique.

As such, the chance of Tanzanite existing outside the current production area is less than a million to one. With those odds, you can understand why Tanzanite is such a highly desirable gemstone. This is more than an investment, it is a once in a lifetime only harvest. 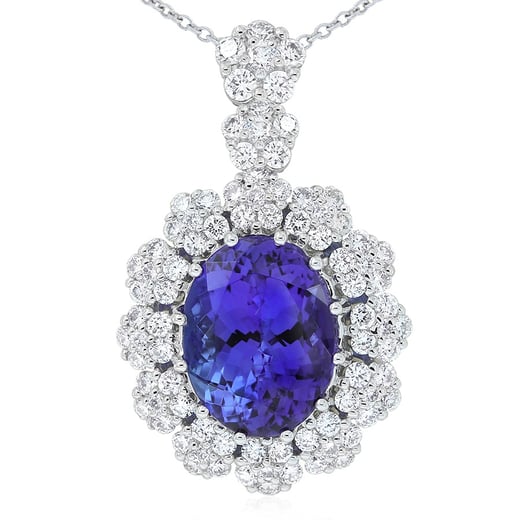 Which is why we are so delighted to bring you our own Tanzanite range, exclusive to Gerard McCabe. Fittingly named the Kilimanjaro Collection, ours is a carefully curated selection of earrings, rings, necklaces, and bracelets.

Each stone has been hand picked by Gerard. For those that are wild at heart, or for one whom beauty and adventure are synonymous with elegance. Tanzanite really does fire up the heart in a way that is hard to describe. It holds a fierce fascination for us all at Gerard McCabe. 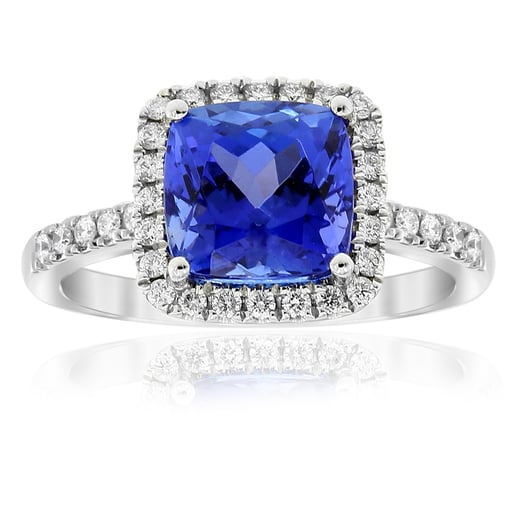 Margaret, from our Rundle Mall store, has a particular soft spot for Tanzanite. “It is so beautiful- it’s my favourite gemstone. It has that beautiful purple under hue and the shots of red that come through the stone. Just gorgeous.” 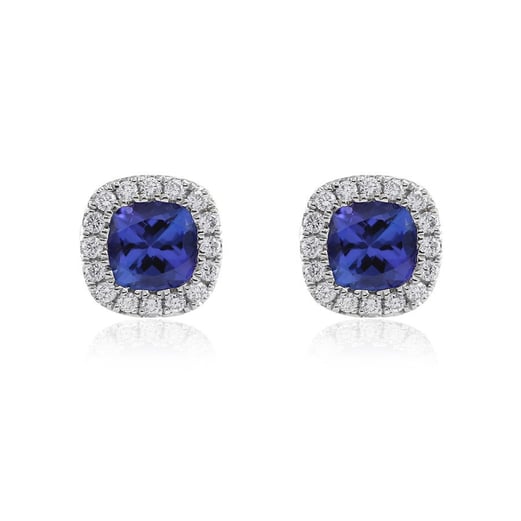 If you would like to come in the store and see our incredible Kilimanjaro collection for yourself, pop in and see Margaret at the Rundle Mall store. In Adelaide Arcade, our resident Tanzanite specialist Tina will be on hand to answer any of your queries.

However you make your living is where your talent lies― Ernest Hemingway, The Snows of Kilimanjaro and Other Stories

Here at Gerard McCabe, Adelaide’s premier diamond jewellery experts we truly believe this too. Our talent is matching you to the perfect piece of jewellery. And just like us, we think you’ll love the mysterious and exquisite tanzanite range. Take a journey to Mount Kilimanjaro and wear a precious piece of the earth, with our stunning Tanzanite collection.